For the past several years, the Tennessee Entertainment Commission has provided pivotal resources that have supported dozens of film and television projects across Tennessee.

These projects have had a substantial impact on Tennessee’s economy, creating more than 4,000 new full-time equivalent jobs in Tennessee and generating $228.3 million in new income for Tennesseans. The economic impact for Tennessee from this activity totaled $370.8 million.

In the process, these productions established a strong – and growing – foundation for the motion picture industry in Tennessee. From 2010 to 2016, Tennessee jobs in motion pictures and video production grew 12 percent, pushing Tennessee to seventh nationally for employment in the industry. Most importantly, these are well paying jobs, averaging about $58,800 annually, nearly 28 percent higher than average for all industries in Tennessee.

To that end, I’m proud to announce that TEC has revised its production incentives for scripted television series. With these changes, TEC seeks to build upon the momentum and success from “Nashville” and other film projects.

Our primary goal is to help cement a permanent and thriving motion picture industry in Tennessee; one that provides extremely well-paying jobs for Tennesseans and also embodies Tennessee’s creative spirit.

What are the new film incentives TEC is offering?
As of September 1, 2018, qualified scripted television series that spend more than $500,000 per episode in Tennessee and include a “Filmed in Tennessee” logo will be eligible to receive up to 30 percent in grant support for their spending on Tennessee labor. TEC will also incentivize up to 25 percent of non-resident labor for qualified scripted television series. This non-resident compensation will be capped at $2 million. We consider this critical for television shows that are casting the top acting talent in the business.

What is TEC trying to accomplish with the new incentives?
These new incentives are specifically designed to attract filming and production of a new scripted television series in Tennessee.

TEC’s primary goal is to build on the foundational success of “Nashville,” which employed hundreds of Tennesseans and helped residents gain valuable experience in film and production. “Nashville” also worked with hundreds of small businesses and production vendors.

We want to replicate that two or three times over. With these new incentives for scripted television series, we think Tennessee will be able to successfully recruit a new series and continue the strong momentum that “Nashville” and others helped jumpstart. 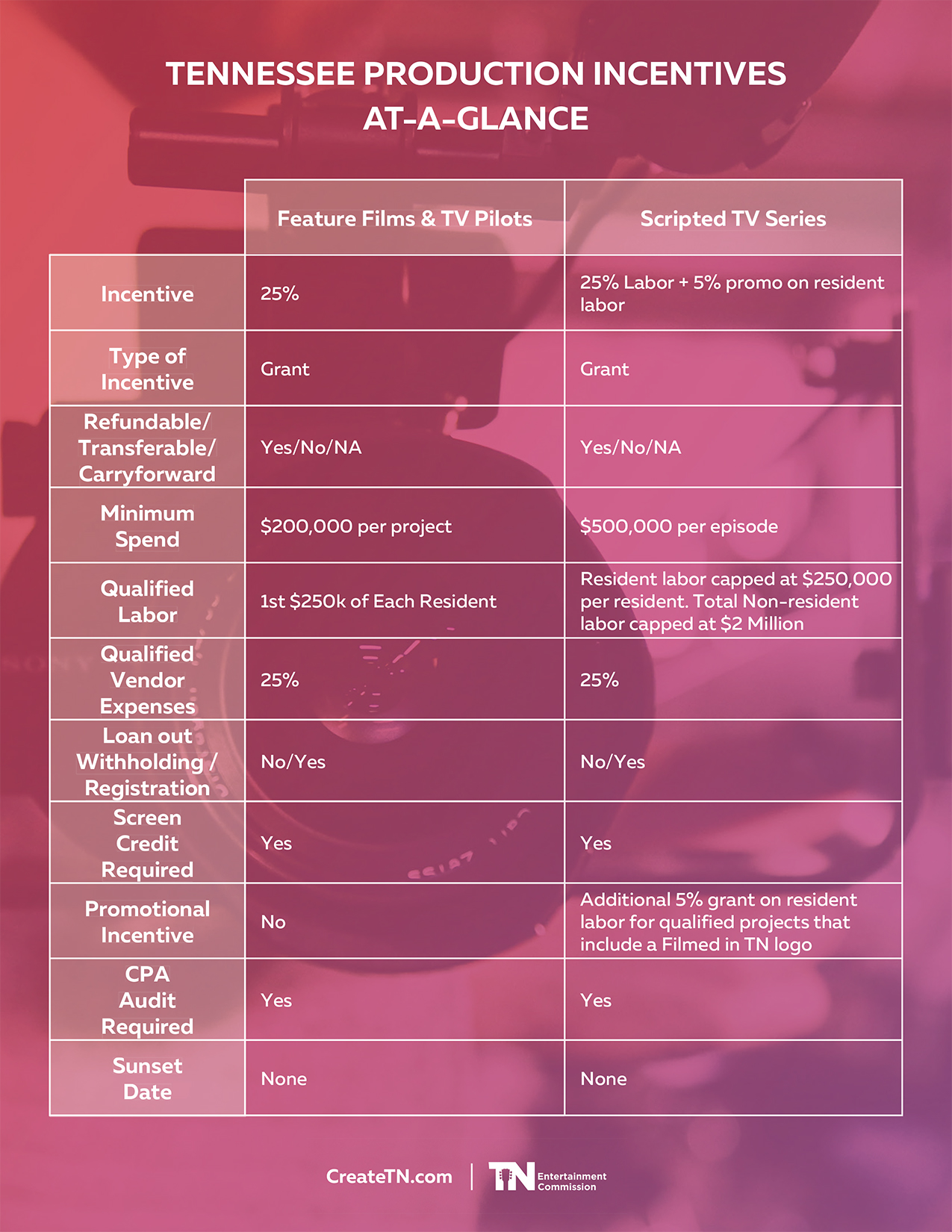 Why is TEC trying to attract a television series?
We want to bolster a permanent infrastructure around film and production in Tennessee. This is all about strengthening and growing a high-quality workforce in a specialized industry that offers high-paying jobs.

There’s no better way to do so than through production of a television series. A television series helps grow indigenous infrastructure and attracts new businesses to Tennessee to support the show.

The production cycle for a season of “Nashville” lasted nine to ten months, repeated over five years. Hundreds of Tennesseans worked on the series – from senior level producers and directors to on set technicians and camera operators.

That type of year-to-year continuity is critical for sustaining and promoting the production industry in Tennessee. For Tennesseans just entering the industry or early in their careers, working on a television series provides an avenue to gain valuable skills.

As more Tennesseans acquire production skills, Tennessee becomes more attractive for future television series opportunities. With these new incentives for television series, TEC is optimistic that the entertainment industry in Tennessee will snowball into an even larger and more consequential sector of the state’s economy.

For example, “Nashville” employed about 250 people full time per season. Over five seasons, “Nashville” directly spent $225 million in Tennessee for labor, goods and services. That’s about $55 million per season. The impact in the broader economy was significant. “Nashville” contracted with more than 500 Tennessee vendors and companies.

In particular, “Nashville” spent millions on music, whether scoring for the show, songwriting, recording or a variety of other work. With Tennessee’s strong music industry, it makes sense for future television series to tap into that expertise. From TEC’s standpoint, a new television series in Tennessee would provide crossover benefits for the music industry as well.